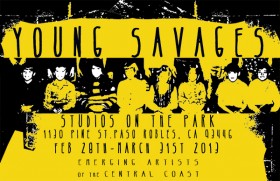 Studios on the Park is proud to present this landmark showcase curated by Neal Breton. On exhibit are signature pieces of formidable spirit and regional importance.

The word “savage” takes on several meanings-- as a noun, it means primitive or uncivilized; as an adjective it describes an animal or force of nature; a verb weaponizes it into an attack.

The Young Savages Collective defies conventional description. Some of them aren’t young (two are 38, and a handful more are in their mid-30’s), and they aren’t really a collective in their grouping. Some of this “collective” has yet to cross paths, some prefer complete reclusion.

The Young Savages are a loose collection of talented, ascending artists—some use skin as their normal canvas, some use walls, some are commercial in their wares and some prefer to show their work only to their close friends. Some have sold paintings for years and some are embarking upon their first show here at Studios on the Park.

We know that many parents aren’t able to send th

Ron Roundy finished off our last of the featured a

Carl Berney is another phenomenal artist who is fe

Ken Wilbanks and his wife Stephanie are our co-cur

Peter Charles, a native of Washington D.C., is our

If you haven’t already, make sure to get your ki