Two One of a Kinds 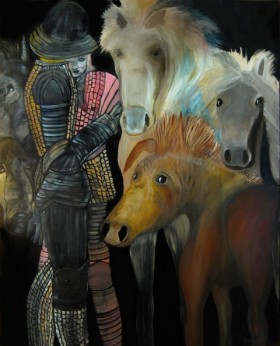 Two One of a Kinds

All those who saw the fine creations of the PRAA Magnum Masterpiece fundraiser in May of 2009 will recall two unforgettable hand painted bottles created by two important artists residing on the Central Coast. Vastly different in style, each artist and his respective work has a strong presence.

The Showroom Gallery is proud to present a deeper look into the work of these two powerful artists in a show titled Two One of a Kinds.

Delene Bost is a California figurative artist who draws on allegorical and mystical themes to express the spirits and emotions of his subjects. He has authored five novels, and lectures on the spirit world and spirit attachment. He studies hypnotherapy, and has been a hospice nurse. Bost's painting influences come from the classical European artists, Odd Nerdrum, and the contemporary muralists of Mexico. An earlier series was called Lifting Youth, his perspective on the state of youth in the American society and their need to be supported by adults. Currently working on a seven canvas series called The Red Chair Series, Delene Bost works from his studio in Cambria.

Michael Ackerman's is well known in SLO county for his passionate paintings, his art activism, and his tireless generosity helping to raise money for worthwhile causes. He has said that the influence for the works in this show come from two themes that are important to him currently. The first is a series of wine bottle creations called ReBeGoDo. The ReBeGoDo bottles are a reminder that regardless of what has happened, …each moment is a fork in the road… To Be this or that. To Go and Do….. To Re create ourselves, and the worlds we have. The second theme is Go Be Mann. Michael tattooed on his left forearm an image of a human form at the entry of a maze. "I came here from somewhere else. I cannot see or know as a Mann, the many near “Mann death” transitions that occur as I move into each new path, or where each path will lead me… here in the maze… of this human part of my existence. The end of the Human Maze leaves me a moment to contemplate my being human before my “Mann death” does occur… and I go to another place unknown to me …. "

Don't miss this opportunity to see into the unique works of two individuals both as men and as artists. They share the commonality of a clear connection with their inner voice, the dedication to their muse, and to the society within which they live.

The show opens with a reception from 4 - 6 pm, Thursday March 24, 2011. Both artists will speak about their work and the show prior to the reception at 3 pm. Both events are open to the public.

Have you seen the new pieces that @barry.lundgren.

From featured artist in our current “Western Tra

Ready to bring on another weekend with some fun? C

The Upfront Store offers all sorts of wonderful tr

To many in the past few years, Bob Ross has been a

Our Kids Art Smart program is opening its classroo

We have NEW items in the Upfront Gift Store from M

Mark Dickinson is the first of our featured “Wes