The Shape of Human Expression: Sculpture and Pottery of the Central Coast 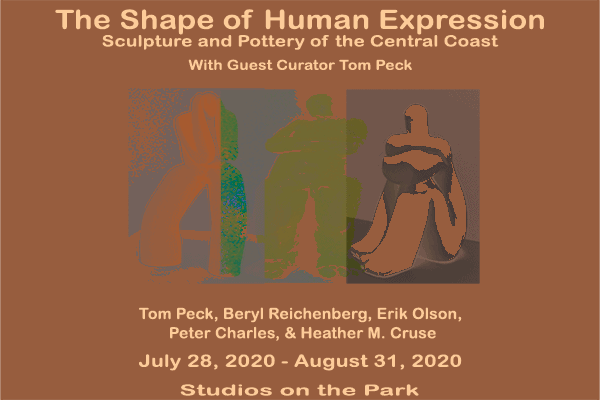 The Shape of Human Expression: Sculpture and Pottery of the Central Coast

One of the oldest forms of human expression is the representation of creative content in three-dimensions. Sculpture and pottery are two of the most important of these art forms. As standards across ancient civilizations ranging from Africa and Europe to Asia and Latin America, they have been foundational to world culture. In contemporary times, these vital artistic traditions have created dynamic new turns in terms of the materials, forms, and elements used. Looking into the future, new technologies and processes have made such evolution even more inevitable. Our region is unusually blessed with superbly-gifted sculpture artists and talented fine-art pottery makers.

We feature five leading local producers of such works in our August 2020 show, which has been co-curated by one of our featured presenters, Tom Peck and curator-in-chief Henry A. J. Ramos. The talented artists are all members of the Central Coast Sculptor’s Group. They are, respectively: Tom Peck (Paso Robles); Beryl Reichenberg (San Luis Obispo); Erik Olson (Nipomo); Peter Charles (San Luis Obispo), and Heather M. Cruce (Morro Bay).

By our own admission, sculpture and pottery have been too-little featured in our past Atrium Gallery Exhibitions. We hope with this show, and its exciting and impressive array of creators and contents, to establish energy and interest to support a forward-going series of comparable shows. To start us on that path, we are most proud to have such an especially talented group of presenting artists in the current complement of offerings. Each of our featured masters presents works that are emblematic of the best art the California Central Coast has to offer in the early 21st century.

@paso_robles_art_association is going back to basi

One of the oldest forms of human expression is the

*BREAKING NEWS* We are so excited to announce that

⭐️SALE⭐️This Monday, Studios on the Park i

We’ve been working on something special for the

Have you gotten your FREE Kids Art Smart box yet?!

“Everything has its beauty, but not everyone see