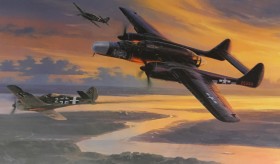 Studios on the Park presents "The Military Experience in Art: Protecting Freedom," curated by Jill Thayer, Ph.D. featuring selected works from the collections of Estrella Warbirds Museum and Camp Roberts Historical Museum. The artwork, which includes paintings and limited-edition prints, brings to life the eras of WWII, and Korean and Vietnam Wars through the eyes of its artists.

About the Curator
Jill Thayer received her doctorate at Claremont Graduate University in Cultural Studies/Museum Studies in areas of exhibition theory, art history, design theory, and visual culture, which included a transdisciplinary study in global strategy and trade through Peter F. Drucker and Masatoshi Ito Graduate School of Management at St. Peter’s College, University of Oxford, UK. In 2012, Dr. Thayer curated "In Their Own Words: Oral Histories of CGU Art," an exhibition featuring alumni, professors, and professors emeritus. The 16-month postdoctoral project produced audio and narrative transcripts included in Archives of American Art at The Smithsonian Institution. Prior to pursuing her graduate studies, she owned a design and marketing firm in Bakersfield, California for 25 years specializing in corporate identity, branding, and marketing strategy in print and web for small business and global companies. As a gallerist of 15 years, she curated regional and international multi-cultural artists through selected exhibitions.

As an educator, Dr. Thayer lectures and develops curricula for colleges regionally and nationally, and is a contributing writer for publications in Los Angeles and Miami. Her academic and professional experiences translate to her role as curator in preserving and honoring military aviation history. She adds, “I am privileged to be a part of Estrella Warbird Museum to preserve and perpetuate the legacy of those who have contributed to its success.” Her father, William G. Thayer served in the U.S. Army as Sergeant of Transportation in the Korean War, and her great uncles were WWII pilots––Laurence “Bud” Schillig Thayer, a Flight Officer in the U.S. Army Air Forces; and Alan Austin Thayer, a Lieutenant Junior Grade in the U.S. Navy. In 1944, Bud Thayer joined the Army Air corps flying C-47 transports in the China-India-Burma theater known as "The Hump." Alan Thayer flew an SB-2-C, a Hellcat dive-bomber off the USS Hornet. After flying 22 missions, he was awarded three Air medals and two Distinguished Crosses.

About the Exhibition Graphic
“Twilight Conquest,” by Nicolas Trudgian. Colonel 'O.B.' Johnson, 422nd Night Fighter Squadron C.O., flying his P-61, brings down an Fw190 on October 24th, 1944, one of 43 victories the squadron achieved in the E.T.O. Published in 1995. Limited edition print from the collection of Estrella Warbirds Museum, Paso Robles, California. ©1995. All rights reserved.