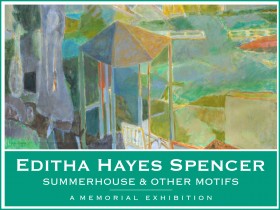 Born in Oakland, California, Editha attended the University of California at Berkeley, graduating in 1943, a Phi Beta Kappa honor student with a B.A. in Art. She became Art Editor of Oak Leaf, a magazine published by the U.S. Naval Supply Depot in Oakland and Editor when it adopted a newspaper format. In 1947 she married Harold Spencer, an artist and later art history professor; together they raised four sons. Over the next 63 years they lived in Berkeley, Illinois, Massachusetts, Los Angeles, and Connecticut, finally returning to California and residence in Paso Robles. During her long career as an artist and poet, Editha produced a large body of work on a wide range of subjects and themes. She exhibited extensively--watercolors, block prints, and oils--winning many awards. Her work is represented in public and private collections from New England to California.

“A few years ago we had a temporary summer house, a sort of gazebo, in the field south of our studio. I made a number of sketches of the small construction before we took it down, and I have been working with the motif, off and on, ever since that time - in oil, watercolor, and block print. Although it was there only briefly, the forms have stayed with me.

The summerhouse structure intrigued me because of its geometry in the landscape. It gave me the opportunity to see the scene through a six-sided shape. Also I felt there a special interpenetration of defined and open space. I often work with a combination of the forms of landscape and architecture and I find the interaction interesting and stimulating, whether it be from the interior space looking our or from the outside looking at a structure in its setting - the forms of nature and the structure relating, each changing the other.

Our world is inhabited by the things we make and place there. In addition to the formal elements they provide, the counterpoint, there is the emotional, psychological component they introduce - the sense of human presence.

I was fond of the summerhouse. It changed the field for me.”

With stitch work and a predominant palette of blue

Come into Studios on the Park and check out all th

📖*FUN FACT* Did you know that Studios on the Pa

Julie Frankel and Melinda Forbes are not only the

We’re so excited that our Kids Art Smart program

Anne Miller and Maggie Pickering are only two of t

“Anything Goes” in the @paso_robles_art_associ