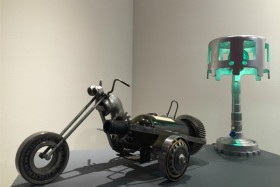 The art of Jesse Jacques

About The Artist
Coming from a family of fourteen, Jesse Jacques learned early on to improvise and was always trying to find a way to make life easier and interesting for those around him. He loved working with his hands and started inventing things useful, unusual and different for his family’s use.

In time, Jesse married, had two daughters and one special granddaughter. By 2006, he was semi-retired with the crippling disease of arthritis and wanted to devote more time to his artistic dream. Jesse found that working with his hands and being excited about welding together art pieces eased the pain of arthritis.

When he moved back east for a time to be near his granddaughter, interest for his art grew. He was interviewed at a local TV station, won several first prize awards for his 3D art and was featured as a new artist for two months at a local museum.

Jesse’s art pieces are found in auto repair shops, homes and local art shops back east. Now he has returned to his roots in California and continues pursuing his passion.