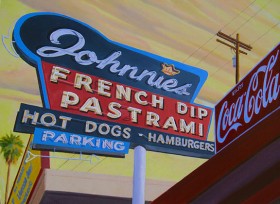 Artist Statement
This series of paintings was inspired by a cross-country road trip from California to Maryland. During this drive I became increasingly aware of the homogenization and corporate domination across our country.

In each city we stopped in, the streets seemed lined with the same commercial chain restaurants, fast food strip malls and big box retailers. I was always pleased when we ran across the surviving Mom and Pop restaurants and stores that attracted my attention with their classic twentieth-century neon signs that sported the wonderful design aesthetics of a bygone era.

Generally, neon signage is considered in its best element during the dark hours of the night. However, I was captivated not only by the graphic design aspects, but equally with the workings of the signage itself. The twisting neon tubes and the interplay of their cast shadows dropped onto the painted surface of the signs.

This interest led me to search out and capture as many of these rapidly disappearing signs of Americana, throughout California and other states I have, and will visit, in the future.

About The Artist
Kristopher Doe is a Southern California native who grew up in the artistically rich San Gabriel Valley city of Pasadena, which was home to many of the California Impressionist, Plein Air painters of the early 20th century. This artistic heritage was instilled at a young age and has served as an inspiration in his pursuit of his own observations of the magnificent natural environment of our Golden State and beyond. Having grown up through the early 1960’s, Kris has also been tremendously inspired by the pop culture of that era and takes particular interest in capturing and recording our rapidly disappearing Americana.

A graduate of Pasadena’s Art Center College of Design, Kris has enjoyed over 25 years experience as a successful freelance illustrator, fine art painter and college level drawing, painting and design instructor throughout Southern and Central California at both public and private educational institutions.