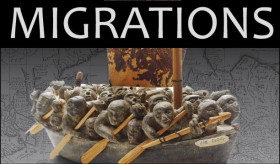 Human migrations often occur at moments of political and religious unrest undoubtedly affecting the social and global landscape of the hospitable land. Cultures are then forever shaped by successive waves of immigration and artistic expression is ultimately a privileged channel that enables the circulation of visual languages and ideas allowing new identities to flourish through individual and shared stories.

Juror Eve Provost Chartrand will be looking for personal vision and creative approach as well as excellence in execution in her selection of one Best in Show and four Awards of Excellence.

@paso_robles_art_association is going back to basi

One of the oldest forms of human expression is the

*BREAKING NEWS* We are so excited to announce that

⭐️SALE⭐️This Monday, Studios on the Park i

We’ve been working on something special for the

Have you gotten your FREE Kids Art Smart box yet?!

“Everything has its beauty, but not everyone see