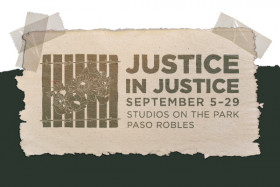 There is a movement underway in the United States to shift the policies of mass-incarceration away from the transactional system of retribution and punishment toward the more humane objectives of restoration and healing.

In this exhibit, artistic expressions which illustrate the transactional nature of what the justice system imposes on the people caught up within it, are juxtaposed with visuals of those ways in which justice is served by placing humanity within the context of seeking justice-in-justice.

Together with advisory and outreach support of Mauer Kunst Consulting's Henry A. J. Ramos and Frank de Jesus Acosta, guest curators Heather and Kevin Mikelonis invited artists in all mediums to share compelling, thought-provoking, and fearless expressions on this theme. They hope that this resulting collection of works will serve to educate, inspire, remove fear and form bonds with one’s own other. Perhaps even ask, of what are we so afraid?

If we can’t see it, we can’t feel it. If we can’t feel it, we can’t know it. If we don’t know it, nothing changes. The suffering of those whom we do not know then continues under the systems we may unknowingly support. Art is a powerful ally in illustrating the ways in which healing on both sides of injustice is the ultimate justice to strive for instead of solely seeking punishment, full stop.