In a New World 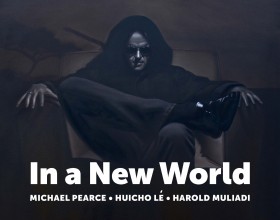 In a New World

This exhibition presents visions of the world as it might be, not as it is. Three artists from diverse backgrounds are joined by their shared love of representational oil painting as the medium for expressing wild imaginations. Dramatic new works by Michael Pearce, Hüicho Lé and Harold Muliadi.

About Hüicho Lé
Hüicho Lé was born and raised in California. He is a member of the new community of Mixtecs from Oaxaca, Mexico that reside in Ventura County. He is also one of the few and the proud, a Marine. Hüicho creates art, “to bring respect and honor to our indigenous community and more importantly, to build a bridge of harmony between our worlds.”

About Harold Muliadi
Harold Muliadi’s paintings show their viewers the world from a perspective which seeks adventure and novelty in seemingly unremarkable settings, altering scale and perspective in order to extract something new and unfamiliar from everyday experiences such as taking a look in the fridge or driving on the freeway. Harold graduated from Moorpark College with an A.A. in Anthropology in 2012, and started painting in 2012, under the mentorship of Dr. Michael Pearce, during his time at California Lutheran University, from which Harold graduated with a B.A. in Fine Art in 2014.

Harold’s approach to art draws influence both from his education in anthropology at Moorpark, which emphasized an interdisciplinary approach to forming ideas and solving problems, and art at California Lutheran, which emphasized the interdependence of skill-based techniques and creativity.

About Michael Pearce
Michael Pearce is an English figurative painter who lives in Ventura County, California.
While on the surface Pearce’s paintings are romantic escapes from the hard edges of daily life, celebrating colorful flowers and beautiful people, there’s a mythic depth to them that reveals the artist feeling his way out of negative deconstruction by drawing upon archetypes and allegories from centuries-old emblem books and alchemical symbolism. Pearce digs for conceptual themes in the paintings that capture his audience by encouraging their individual imaginative interpretation of the events he has painted. There’s meaning here – a reconstruction of ideas bigger than ourselves – that makes these paintings feel greater than their already large size.

In addition to his successful career as a painter Pearce has a strong background in scenography and installation art. Although he has lived in California since 1990, his love for his previous homes in Wiltshire and Devon has never left him and has powerfully influenced his work, and he regularly visits England. In 2008 he completed a PhD at Plymouth University, submitting a dissertation on Neolithic British ritual art and architecture. He teaches at California Lutheran University in Thousand Oaks, where he is responsible, with his friend Michael Lynn Adams, for organizing The Representational Art Conferences (TRAC). He is editor of the Proceedings of the Representational Art Conference, and has recently completed a book about the aesthetics of representational art in the emergent age which will see publication in 2014.

We are just full of wonderful news this week! Clas