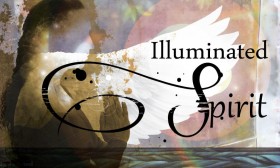 This exhibition presents four different voices united by similar, intangible emotions. From surreal scenes of day-dreaming to sometimes wild, sometimes peaceful environments; from the intimate and spiritual connection of one’s journey to the playfulness and insightful humaneness of another, join these amazing artists as they voyage beneath the surface of things and reveal sublime mystery and beauty. Surrender to their wonder, to the poetics of their message and let your mind be enlightened by light from outside itself, from deep within. Illuminated Spirit: unique works by Heidi F. Beal (encaustic), Geoffrey Nelson (sculpture & photography), Jane Russell (oil painting) and Kabe Russell (photography).

Heidi F Beal
Heidi F Beal is an interdisciplinary artist. She is best known for her mixed media paintings using encaustic and photography. Her work is narrative and often references nude studies, architecture, transparent forms, and found objects. Introspective issues are explored, encouraging the viewer to be transformed to another place and time. At times, her art becomes a personal religion, crossing lines between traditional art, other disciplines, and her connection to Spirit. Beal says, “my art feels as though it is channeled through my body. As a conduit, I often feel as if Spirit is directing my hands. My mind then follows, reading the story my hands tell.”

Beal received her Bachelor of Arts from Miami University in Oxford, Ohio (1985) with additional graduate studies at California College of the Arts in Oakland, California (1985-1987). Beal is based in downtown Bakersfield, California and is fond of traveling the countryside on creative, eclectic adventures, showing her work regularly, and teaching encaustic painting.

Geoffrey Nelson
Geoffrey has been shooting professionally ever since his days as a photographer for the Daily Californian during his university career at Berkeley. Since then he has worked for national magazines and for the last twenty years he has concentrated on studio and location work with an emphasis on fine lighting. He has burned up a whole lot of film and pixels in his career but still gets excited about the possibilities every time he picks up his camera or sits in front of a blank screen.

He has been past president of the Peninsula Advertising Photographers Association and has won numerous national awards for his annual report and brochure work. His fine art work has been included in surveys and his project, "A Tribe of Artists" was a solo museum show and is now traveling for two years throughout the state of Nevada.

His latest work consists of revisiting iconic female archetypes and imagining them with new technologies in our post feminist world.

About Jane Russell
Jane Russell’s paintings most often depict the forces, elements, and beasts of the natural world. Her childhood was spent living amidst the vast forests, rivers, and clean skies of Oregon, where she developed a deep connection to the sometimes wild, sometimes peaceful environment and its inhabitants. Jane considers herself an advocate of animals and the environment and strives to honor both in her work. She is currently working on a series of paintings of animals resting on benches, inspired by her desire that animals be respected, protected and given their rightful place in an increasingly congested world. She is enchanted by the sublime mystery and beauty so freely offered by nature and hopes to share her appreciation and wonder with those who view her paintings.

Jane is a long-time resident of San Luis Obispo County who paints in oils, pastels and watercolor. She has fostered her art education through college classes, personal instruction from mentors, and years of her own painting experience. She has taken workshops by leading painters, Robert Reynolds, Carolyn Lord, David Settino Scott, and Kate Moldauer. Her work has been displayed in many local juried exhibits and has won numerous awards.

About Kabe Russell
Kabe Russell is a self-taught photographer and photomontage artist. He began photographing his friends and worked with black and white film in a wet darkroom, starting in the 1970’s. When digital darkrooms became possible 25 years ago, he immediately bought Photoshop and started on this new path. His lifelong passion for photography has provided him the good fortune of having his work included in five museum exhibitions, both nationally and internationally, including a solo exhibition at the San Luis Obispo Museum of Art. Kabe participated in dozens of both invitational and juried exhibitions around the country. His work has been published on the cover and with editorial articles in national magazines including Leonardo, Camera and Darkroom, B&W, and PEI. Kabe has been represented by a half dozen galleries and is currently represented by the Painted Lily Gallery in Cambria, California.

We are just full of wonderful news this week! Clas