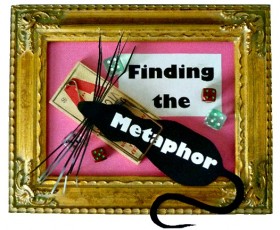 Finding The Metaphor is a collection of Al Schnupp's assemblages and sculptures inspired by theatre. Each work is a visual interpretation of a classic, modern or original play. The artist studies a script, trying to ascertain a number of elements: the theme, significant lines, the atmosphere, the objectives of characters, the relationships of characters. After determining these key elements, the artist attempts to illustrate them by using text, caricature, archetypal shapes and miniature scenography. A variety of materials are used: paint, paper, wood, glass, metal, fiber, plastic, found objects and crafted objects.

Al Schnupp is a faculty member of the Theatre and Dance Department at California Polytechnic State University, San Luis Obispo. Mr. Schnupp studied at the American Academy of Dramatic Arts in New York City and holds a doctorate from UCLA. He performed in summer stock and directed or designed approximately eighty productions for academic and professional theatres. Mr. Schnupp was the recipient of the Margo Jones National Playwriting Award for the play My Body. He is the author of the textbook Theatre: A Model of the World, published by Kendall Hunt. His play, Censored, about the life of artist Kathe Kollwitz, was produced professionally at The Invisible Theatre. His improvisational game book Bravo! is published by Meriwether Published Ltd. The Stone Circle, a full-length adult puppet show, was co-authored and designed by Mr. Schnupp; the show was produced at the Center for Puppetry Arts in Atlanta and won an UNIMA International Citation of Excellence. Zero to Infinity, an original political spoof, was selected to be performed at the Kennedy Center American College Theatre Festival, Region 8 Festival. The Site was produced at the American Theatre of Actors in New York City and at Walkerspace in New York City. Living Stones was produced at Cal Poly and showcased in Los Angeles. Antigone and Letters to Soldiers Lost was produced at Cal Poly, as was The MerryWinkle International Troupe of Vagabonds Performs a Delicious Potpourri of Fantastical Fairy Tales and Astonishing Folk Legends. Winner of an “Art Inspires” grant the play The Travels of Tobias was recently revised and retitled CrossRoads. As a visual artist, Al participates in a variety of art and craft festivals in California. His work is also displayed at the Paul Mahder Gallery in San Francisco.