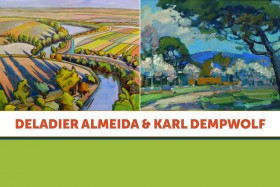 Internationally-acclaimed and award-winning painters Deladier Almeida and Karl Dempwolf are featured in this two-man exhibition.

About Deladier Almeida
Despite growing up in a family with no other artists, Deladier Almeida started sketching when he was just five years old. His friends in his native country, Brazil, would pose for him while he created portraits that seemed beyond his years. When he got older, he studied urban planning, industrial design and architecture while working at a São Paulo newspaper creating portraits of international heads of state.

In 1985, Deladier moved to the United States where he attended UC Davis and began studying art more intensely. It was there that he met renowned artists Wayne Thiebaud, Roland Petersen and Roy De Forest, all of whom had an influence on the aspiring artist.

Working quickly, with an emphasis on improvised brushwork, Deladier Almeida captures the sense of traveling over the earth, geometric shapes of productive land passing in a mesmerizing array of shapes and colors. With a rich palette and luscious brushwork, Deladier infuses vitality into each of his subjects, which range from portraits to scenes of contemporary life to brilliantly observed landscapes.

His images of California’s varied terrain, depicted from a bird’s-eye view that Almeida achieves by flying over regions of the state in helicopters or small planes, are alive with texture and movement. “The way my painting comes out is a function of the way I attack it,” he has said, adding, “I have to work on the edge of my rational mind.”

As in the landscapes of Wayne Thiebaud, the images beautifully manipulate perspective, presenting us with compositions that pulse with life.

About Karl Dempwolf
Karl Dempwolf is a California Plein Air artist, known for his landscape paintings. One of Karl's paintings was recently presented to Chancellor Angela Merkel by President Obama; Karl will be honored with the Lifetime Achievement Award this year at the National Plein Air Convention and Expo. He is a longtime Signature Member of the California Art Club, and serves on its Advisory Board of Directors.

Dempwolf was born in Delmenhorst, Germany, and spent the war years in beautiful Bavaria, surrounded by sparkling lakes, dramatic hills, misty forests, and of course the majestic Alps, where he developed his love for nature. While a teen, his scientist father was recruited to serve in the U.S. aerospace industry, and the family immigrated to California. Karl went on to become the first All American athlete at Cal State Northridge, earned a graduate degree at USC and received training at Art Center School of Design.

Karl's early career as a filmmaker led to the production of "Story of a Craftsman," a documentary about the handmade Calliccio Trumpet, which won the Golden Eagle award as well as Best of Show at the Belleview International Film Festival in Washington.

In time, painting became Dempwolf's passion, inspired by early California artists such as William Wendt, Guy Rose, Charles Reiffel, Edgar Payne and others, Karl strove to create paintings which would provide the viewer with a spiritual lift as they contemplate the miracles of nature.

Jean Stern, Executive Director of the Irvine Museum in Orange County, California, wrote, "Karl's paintings are rich with the lessons of Modernism. His forceful use of line gives his paintings great strength and intense formal qualities, and his luxurious use of color imparts a profound yet impassioned consciousness. The best way to appreciate Karl's work is to project the lives and careers of the late 19th and early 20th century California Masters as if he had lived another hundred years and had prospered in the artistic milieu of Modern Art."

Allen Cox, a contemporary painter featured in our