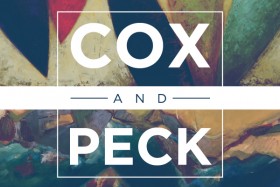 About Allen Cox
Born in Eugene, Oregon in 1950, Allen Cox is a contemporary painter who's been showing his work nationally since 1982 and internationally since 2003. He holds an MFA in painting from the University of Oregon, where he studied with the highly regarded Pacific Northwest abstract painter Frank Okada. Cox worked as a field archaeologist and scientific illustrator for over 10 years in Oregon, experiences which profoundly influence his painting.

Allen Cox's work has been featured in New American Paintings: Artists of the West, a video profile segment for the public television program Oregon Art Beat, and the book 100 Artists of the West Coast. Cox's work has also appeared in numerous design journals, most recently LUXE Pacific Northwest Summer 2013 issue, and other visual media including book covers, CD covers, film and television. His paintings are found in public, corporate and private collections throughout the US, as well as internationally. Cox now resides in California and has previously lived and painted in Oregon, New York, New Zealand, Tennessee and Wisconsin.

About Tom Peck
“I have a definite idea of where I want a painting to go. I know the subject. But I usually don’t know exactly how it’s going to get there. After the academics, such as color and composition, etc, it comes to feel. Does it feel like the person or place I envisioned? Whether it’s a landscape or a representational subject, in the end, the feeling tells me whether or not it is successful. In addition, I do like to have an executional style that is fresh and own-able. The process can be torturous, albeit in that rewarding kind of way. Love it one day, hate it the next. But I just keep pushing toward my destination. I’ll know it’s finished when it stops disappointing me. I work in an abstract expressionist style, oil on canvas, which allows me to communicate the feel of a specific place or person, without the emotional limits of realistic detail. As I said, I prefer to communicate the essence of something by simple line, shape, color and energy.”

Tom graduated from the Art Center College of Design in Los Angeles. His experience includes many years as an advertising Creative Director in Toronto, New York City and San Francisco.

He currently resides, and has his studio, with his wife and son on his ranch in El Paso de Robles, CA.

Tom’s work is in many private collections in the US.

The “Tell Me A Story” exhibition in the @paso_