California Impressionists: The Masters & The Greats They Inspire 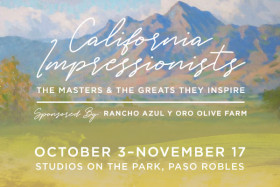 California Impressionists: The Masters & The Greats They Inspire

With an aim to connect the great and timeless legacy of historic California Plein Air art to the 21st century, Studios on the Park presents California Impressionists: The Masters & The Greats They Inspire. In this exclusive and exceptional exhibition, 41 of our nation's premier painters pay homage to their historical counterparts with new paintings inspired by masterworks from artists such as Maurice Braun, Selden Gile, Edgar Payne, Granville Redmond, Marion Wachtel and others.

We love seeing the joy that all the students get f

Come on over to Studios on the Park this Saturday

Our Up Front Gift Store is the perfect place to co

Meet the Resident and Associate artists of Studios

Come have a taste of @ancientpeaks scrumptious win

@mcrobbinsstudios is back again by popular demand

A familiar artist to Studios on the Park, George J