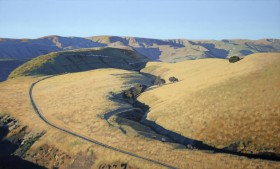 “For me the physical act of finding, composing and painting the landscape has become more than a formal and sensual activity. To marvel at our presence in the world is the true subject.”

Bruce Everett’s landscapes in oil are characterized by bold and often dark compositional forms, dramatic effects of light, and a sense of solitude. The combination of both smooth and expressive brushwork within a single painting creates a visual intensity and lends truthfulness to the subject. In larger works of up to 10’ x 13’, viewers often feel their presence within the scene. Many of his studio paintings were done from photos he took while flying his ultralight airplane, giving the scenes an unusual viewpoint. In addition to his larger technically involved studio pieces, Everett often does smaller more immediate plein air paintings to study and capture the transitory effects of light and weather, and to experience a location more directly.

Bruce was born in Los Angeles but raised in the Midwest just north of Chicago. Being an only child, free to play on the bluffs and in the wooded ravines along the shore of Lake Michigan, most certainly contributed to his becoming a landscape painter.

Bruce has had a successful career as a painter for more than forty five years. He has had many one-man shows, including in New York, Los Angeles and San Francisco. His work has been exhibited in museums and galleries in Los Angeles and throughout Southern California, Oregon, Seattle, New York, Connecticut and Texas. He is also included in numerous books, exhibition catalogs, and publications on Photorealism and landscape painting. His paintings are in many public, private and corporate collections.

Peter Charles, a native of Washington D.C., is our

If you haven’t already, make sure to get your ki