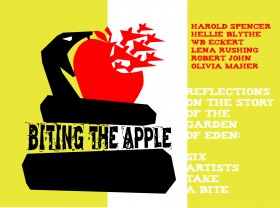 The Garden of Eden story has as many interpretations and ramifications for the human tribe as the number of people who hear it. Some see it as a story of humanity’s first disobedient act against God, others as an account of the amazing gift of free will, still others as a justification for using nature for their own personal agenda, and some go so far as to see it as a justification for the subjugation of one gender over another. Biting the apple is another interpretive look at the story by six artists represented by both genders with ages spanning eight decades.

August is sneaking up quickly, which means the fir

Have you seen the new pieces that @barry.lundgren.

From featured artist in our current “Western Tra

Ready to bring on another weekend with some fun? C

The Upfront Store offers all sorts of wonderful tr

To many in the past few years, Bob Ross has been a

Our Kids Art Smart program is opening its classroo

We have NEW items in the Upfront Gift Store from M