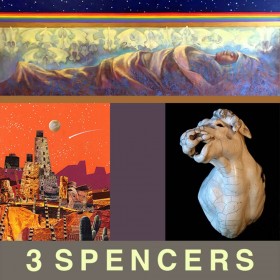 In a celebration of artistic divergence and diversity in one family, Studios on the Park artist Harold Spencer and his two youngest sons mix it up with paintings, sculptures, collages, drawings, prints and text, exploring subjects and themes as varied as their choice of materials.

3 Spencers is the second union of these artists, coming 15 years after Art As A Family Affair, an exhibition held at the University of Connecticut in 2000. The 2000 exhibition also featured Editha Spencer, a noted printmaker, painter and watercolorist, whose memorial exhibition was held at the Studios in 2011.

About Harold Spencer
For “Spence” the natural world has always been the primary wellspring of his art. His more or less literal transcriptions of landscape elements in distinct chromatic layers give his work a strong abstract sense of order. His tiered compositions, separated by prismatic spectrums of color, evoke geological strata where the present mixes with layers of past experience, and images scale simultaneously near and distant.

Over the years Spence has worked in a wide range of mediums including oil; encaustic; watercolor; tempera; fresco; and various print mediums, including engraving, monotype, wood block, and linocut. Since his first exhibition in 1941, Spence has participated in over a hundred juried and invitational group and solo shows. For forty years he taught art and art history and is the author and editor of a number of art historical texts and publications.

At 94 he continues to paint and draw as a resident artist at Studios on the Park.

About Eric Spencer
For Eric image-making is an unexpected and liberating journey that often begins with a spontaneous initial mark; a found object—a stone or branch picked up on a river walk; an emotion; or a singular experience: all potential sparks for the visual process. He describes his approach as increasingly improvisational, where imagery and form emerge and are continually transformed by manipulations of one kind or another. This open approach energizes and directs his sketchbook-art, his fantastical collages, and his “Riverpeople” sculptures.

Eric is a professional illustrator, graphic designer, architectural designer and educator. He is a consultant to a number of innovation and creativity firms in the field of product concept design. For over thirty years he has run his own illustration and graphic design studio, and is currently an adjunct art faculty member at Quinebaug Valley Community College in Connecticut.

About Mark Spencer
Mark Spencer is primarily a self taught ceramic and mixed media sculptor whose masks, heads, and assemblage figures capture a wide range of expression, gesture, motion and mood. His two-dimensional work, in particular his life drawings, also reflect his interest in gesture and movement. His ceramic work includes raku, pit and salt-fired pieces as well as more standard high-fired works. His assemblage pieces combine branches pruned into human and animal form in combination with ceramic and other elements.

Mark’s themes—some comic commentaries on human nature, some more serious social and political observations—are developed through visual puns, allusions and text. His somewhat jaundiced take on human nature and the human condition is usually tempered with humor and a sense of the absurd in everyday life, a cocktail that accounts for his survival as a high school English teacher for the past 35 years.

The “Tell Me A Story” exhibition in the @paso_