Finally Getting to Paint!

By Drew Mayerson
< Back

Finally Getting to Paint!

Drew Mayerson can vividly recall the words of his mother: “You can’t make a living as a skier!” Even in his teens he knew that much. “And you can’t make a living as an artist either!” These were her words when Drew used to tell her of his dreams and aspirations. To Drew, it was the artist comment that hurt most because plenty of people make their living in the arts but his parents had something to prove. His older brother was to be a lawyer and they told Drew that he should choose a profession of equal stature…. if not a lawyer, then maybe a doctor or a dentist they said. At this point he was only 17. Drew believes that the gods shined on him when his brother rebelled and told his parents that he was going to become a songwriter and later a screenwriter. All of a sudden, the pressure was off… but their words had already been imprinted on his brain. Still needing a profession, he decided to choose the one science that allows a person to express their creativity, offers a decent salary, and gain a modicum of respect from parents and relatives: geology. It was outdoors like a skier and it was interpretive like an artist. Art could wait…. Drew’s career path was set.

By age 24 he had a job in geology and traveled the globe seeing the mountains and valleys of the west, the plains of North Dakota in the winter, and flying in a four-seater over the savannah of Sudan chasing herds of elephants and towers of giraffes, just like Out of Africa. He met and became friends with farmers and ranchers and tribesmen and tradespersons from all over the world. They say that if you want to impress somebody, find somebody that is impressionable. Bingo! He soaked it in and it is still in there.

It was during those years that Drew finally picked up a paintbrush, a canvas, and some oil paints. His first “masterpiece” was a 9”x12” painting of a stand of aspens on an Idaho hillside in the fall. His girlfriend at the time praised it profusely. “Looking back, it was pretty bad,” Mayerson says… but it was a start. Over the years he kept at it…. geologist during the day and painter at night and on weekends. Eventually Drew settled in Los Angeles where he grew up, married a beautiful woman, and had two girls. That was over 35 years ago and they are still hanging in there with grown kids who have careers of their own. So, in 2017 Drew hung up his map case for good and devoted himself fully to art.

Drew’s first painting inspiration came when he read about the early California Impressionists and soon after began seriously painting local landscapes. Over the years his paintings have evolved into cityscapes and now into some abstract and experimental paintings. While Drew works in oils almost exclusively, he has been known on occasion to complete a watercolor or acrylic or even a stone sculpture or two. To see his art for yourself, visit www.mayersonsonfineart.com or follow him on Instagram @drewmayersonfineart. Better yet, stop by Studios on the Park in downtown Paso Robles where Drew is finally getting to paint in Studio 3 and looks forward to meeting art lovers like you! 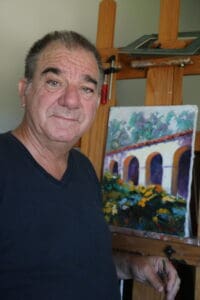 Drew Mayerson
Drew Mayerson paints his surroundings including landscapes and cityscapes often relying on his background as a geologist and a natural observer of the environment in which he lives. Drew looks "for ordinary scenes that can be described as muted with…
END_OF_DOCUMENT_TOKEN_TO_BE_REPLACED

⭐️Feature: Marisela Norte is the author of Pee

🎨“Art is our one true global language. It kno

⭐️Feature: Peter Charles, the last of our “S

Studios on the Park is CLOSED today for Labor Day!