By Dean M. Crawford Jr.
< Back

When you first view a canvas made by Dean Crawford Jr., you naturally assume that you are looking at a painting but in reality, it is a digitally enhanced photograph!

In his career as a Graphic Designer and Photographer, Dean applied his graphic skills to the development of individual study units, logos and trademarks, brochures, booklets and many related graphic arts projects. The use of photography and images was a daily requirement. Dean’s career was in Education, both Community College and at the University levels in California.

In 2007, Dean retired from Cal Poly State University after 37 years of state service. Finally he had reached a time in his life to develop new skills with his artist’s eye. He picked up a camera again, but this time it was a digital camera. Dean decided to try to mix his graphic design knowledge and skills with the new digital photography images he had been shooting. To make this combination work, he had to explore many products and software to blend them together successfully.

The experiment was born!

So started the search for a good and effective photo editing software. Dean selected Photoshop and began playing with its features on his digital images. By using PS and experimenting with colors, textures, cropping, contrast, Dean started to develop the mix of media he was looking for. It became clear that additional filters were needed to finish that mix for that desired enhancement. With his selection of several special effects filters and many more hours of experimenting, his images began to come alive!

Shortly thereafter, using his computer like a paint palette, he developed the look and style he was hoping for in his photography. He set up a home printing studio and office and began to show his new images to the public achieving the full circle of photography that he desired. By sharing with local shows at the Cal Poly State University, city offices, Studios on the Park, PRAA (Paso Robles Art Association), local wineries, city libraries and many local businesses, his photography took off!

Finally, Dean wanted to find an outlet or location to show and sell his work. In January 2017, Dean was able to open his studio in Paso Robles. He asked his friend and fellow photographer, Deb Hofstetter, to join him in the studio experience. They both decided that the best location and best galleries in the county were at Studios on the Park in Paso Robles. Dean and Deb opened Studio 4, right in the heart of the downtown. Since then, their studio has been enjoyed both by the local community as well as tourists from around the world. Their show changes monthly so ‘fresh’ digital art is always on display.

As a photographer, Dean has won and received numerous first place awards and special merits of excellence for his images in this county and beyond. He is also a lifetime member of the PRAA.

Dean and his wife Robin travel each year throughout the Pacific West, Canada and the Southwestern states of our country to photograph the great sights and National Parks in those states.

You can reach Dean by email at discodean50@yahoo.com. 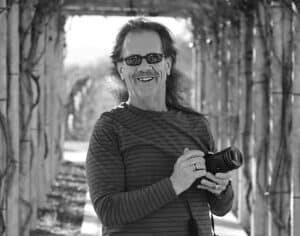 Join us this Saturday to taste wines from our newe

Rod Baker is our next featured “Luminous Lightsc

It's going to be another gorgeous weekend here in

It may be called the kids art camp bag...but it's

Happy Labor Day! We are closed today to spend some