Hellie’s Gap Year has continued for several quarters of a century, during which time she worked on a farm, in a boat yard, raced sailboats, jumped horses, milked cows, spotted enemy aircraft, learned to read and write, got married, moved across a continent (in an uncovered wagon), and raised a family of four, while locally enjoying a robust liaison with Pioneer Players, designing and painting stage sets for musicals produced between the 1960’s and 1990’s, gleefully slapping paint on backdrops (some were 14feet x 36 feet), with big, fat juicy brushes, and has just won a prize for the longest sentence ever written in the 3rd person. Speaking of which, she has written several nonsense books: Knights of The Oblong Table, Pigtails, Venom Between the Covers, A Knight to Remember, C-Sick for Sailors, and a host of mini books, which are presently sold out. But thanks for asking. Hellie was born (in wedlock) in upstate Corning, NY, before TV and Computers in the age of Good Old. She enjoyed art instruction from infancy, (her earliest art instructors studied under her father’s aunt, Anne Leach Walker, renowned watercolorist). Leaving Corning after WWII, she was fortunate to find art instruction by William Cheever, Ted Kautsky and Alma LeBrecht in MA, William B. Schimmel, Sr. in AZ, Sherri Mc Graw, David Leffel and Lorenzo Chavez in NM, John Cosby, Julie Houck and Scott Christensten, here and there. 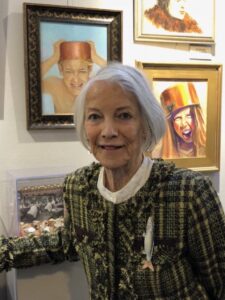 Tomorrow at Studios on the Park, Drew Mayerson wil

Meet artist Lynn Kishiyama, who has been collectin

If you made art out of recycled materials, what wo

Some prom-goers decided to stop by Studios tonight

We are pleased to introduce our new Up Front Galle

Mary Ann and Farrah from Visalia were visiting and