While much of the art of the past has dealt with
the glories and follies of humankind, I feel a need
to portray nature for its own sake
with the hope of promoting value and respect
for our unique planet and the varied forms
of life with which we share it.

Dennis Curry first traveled to East Africa in 1982 to study big cats and became captivated by the awesome landscapes and rich diversity of wildlife. The primal power of Africa brought him back many times and became the focus of much of his work.

During his service with the US army in Vietnam in 1966, Dennis was affiliated with the combat artist program. This was a program to document the combat experience from an artist’s perspective and taught him the power of the rendered image. Returning to civilian life in 1967 Dennis became caught up in the renaissance of original printmaking. Over the next 10 years he worked mostly in the traditional intaglio mediums of etching and engraving.

From 1980 to 1998 Dennis created most of his imagery in the contemporary medium of Mylar lithography. He found this mediums unprecedented facility for working with color to be like “painting with the press.” In 1984 he founded Blue Berry press for the creating of his own art as well as working with other artists in the versatile medium. 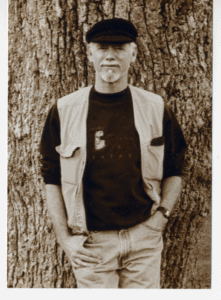 Did you know some of our resident artists are auth

We could stare at these abstract creations all day

There’s no place like home for the holidays, so

The table is set and ready for you! ☺️❤️